Our students live meaningful experiences during the 14 school years, which are divided into four stages: 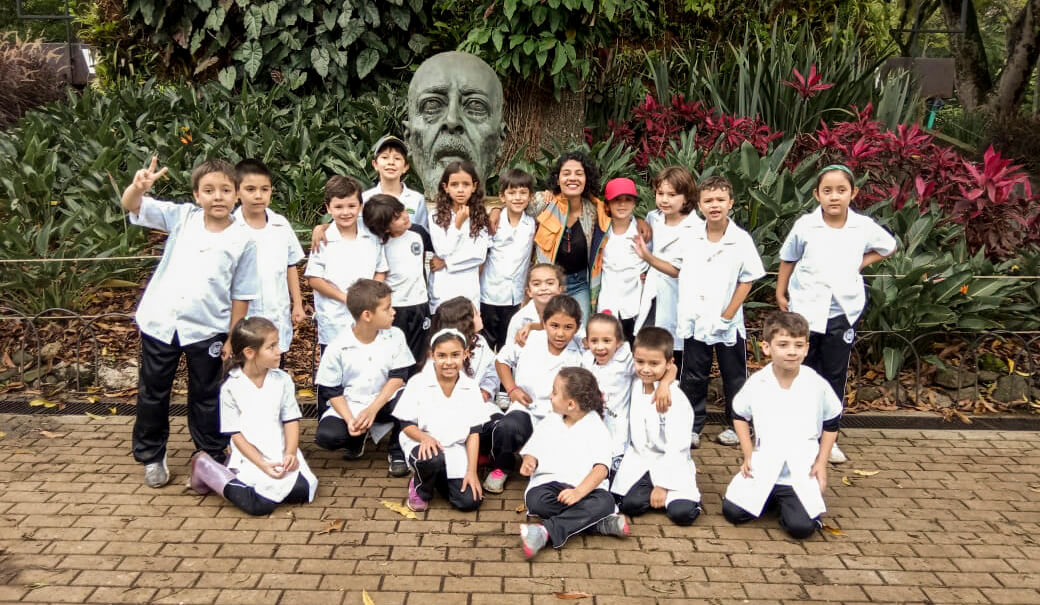 In these first two years the emphasis is in the formation of autonomy, with actions such as going to the bathroom, getting dressed, serving and eating alone, even choosing activities by themselves. In this process, the students have the permanent accompaniment of two homeroom teachers per group: one German-speaking and one Spanish-speaking, so that all their projects and actions are accompanied by the formation of basic notions in the learning of the second language, having as a basis the ludic: learning by playing.

This section has four academic grades and the focus is on meaningful learning. At this stage, students begin the process of bilingual reading and writing, which they strengthen with subjects in German such as Mathematics, Arts and Sports.

In order to provide a holistic learning process, they begin their participation in leisure activities -ATL- a differentiated offer of more than thirty options provided by our three schools: Music, Arts and Sports, where children develop and strengthen skills according to their likes and aptitudes. Likewise, the Little Scientists methodology is included in the learning of the Natural Sciences, which gives the students the tools to initiate investigation processes, by means of experimentation.

In addition, competencies in the use of Spanish and German are developed and evaluated by taking the ECCO and A1 tests, respectively, in Klasse 4.

With the passage into this section, emphasis is given to the conflicts’ negotiation, a process accompanied by programs such as Scholar Mediation in which students, trained in these subjects, intervene in possible difficult situations in the coexistence among their peers.

In the academic field, new knowledge is introduced such as English; with the structure of learning the second language consolidated, the acquisition of a third language is made easier. On the other hand, the three-week trip to Germany in Klasse 6, with an academic orientation and immersion in the culture, allows for a first direct contact with the country, in which, as a group, they strengthen their independence, autonomy and their knowledge about the language, as part of the preparation for taking the A2 proficiency tests.

To finish this stage, History in German is added as a subject with knowledge that strengthens the language skills, to face the last academic section: Oberstufe. Likewise, they carry out the Environmental and Cultural Training Project in Isla Fuerte (Colombia), an experience in which they have the opportunity to share and develop social projects with children from the region and carry out activities such as diving.

In this last stage the focus is on analytical and critical thinking. In Klasse 9, the Deutsches Sprachdiplom I -DSD I- (German proficiency test, level B1) is presented before the six-month academic trip to Germany, which takes place in Klasse 10, an experience in which, individually, they attend classes in educational institutions in the country, in order to strengthen their communication skills in the language, as a preparation for the presentation of the Deutsches Sprachdiplom II -DSD II- (level B2/C1), in Klasse 11. Likewise, students prepare for the standardized English exams (level B2/C1) and the colombian government test Saber 11.

During the last two years, students take part in the Diploma Programme of the International Baccalaureate, in multilingual modality -GIB- in which they have the opportunity to choose between different profiles, according to their interests and aptitudes. This program has a teaching approach in which students certify the different core components and subjects, which include German, Spanish, English, and others taught in German as Mathematics, Biology and History, studying, at least two of these, to finally aim for the Diploma, through IB exams, reaching a double degree. In addition, as part of the orientation for self-interests and vocational skills, students participate in national and German university fair, as well as in projects like the United Nations Model, Business Experience Program, and the practicum in the Bundestag (German Parliament).

The International Baccalaureate Program -IB- of the International Baccalaureate Organization -IBO- more than a stage and a goal at the end of the academic year, permeates our teaching from the base. The formation of our students responds to a profile of children and youths who are characterized as inquirers, knowledgeable, educated, thinkers, good communicators, principled, open-minded, caring, bold, balanced and reflective.

As is evident in the process, autonomy and critical thinking are essential transverse axes of our students’ formation; skills and abilities that allow our education model to be developed comprehensively from the academic to the personal dimension.

Within our philosophy, we all identify ourselves as learners, therefore, for the continuous improvement plan, our teaching staff has the permanent support of a team of specialized trainers that contributes with different tools and techniques to strengthen the teaching-learning process in each of the formative stages, guided by principles such as the achievement of a good class hour and the application of differentiation, understanding the various rhythms and learning styles of each student, aspects evaluated internally, among peers, and externally with the German Government visit, through the BLI (Bund-Länder-Inspektion or school inspection).